In the mid-twenties [1920's] I was head nurse at the Sisters of Providence Hospital in a northern Ontario town. One day one of my nurses was bathing an elderly lady patient. I noticed that one breast was a mass of scar tissue, and asked about it.

"I came out from England nearly 30 years ago." she told me. "I joined my husband who was prospecting in the wilds of Northern Ontario. My right breast became sore and swollen, and very painful. My husband brought me to Toronto, and the doctors told me I had advanced cancer and my breast must be removed at once. Before we left camp a very old Indian medicine man had told me I had cancer, but he could cure it. I decided I'd just as soon try his remedy as to have my breast removed. One of my friends had died from breast surgery. Besides, we had no money."

She and her husband returned to the mining camp, and the old Indian showed her certain herbs growing in the area, told her to make a tea from these herbs and to drink it every day. She was nearly 80 years old when I saw her and there had been no recurrence of cancer. I was much interested and wrote down the names of the herbs she had used. I knew that doctors threw up their hands when cancer was discovered in a patient; it was the same as a death sentence, just about. I decided that if I should ever develop cancer, I would use this herb tea.

About a year later I was visiting an aged retired doctor whom I knew well. We were walking slowly about his garden when he took his cane and lifted a weed. "Nurse Caisse," he told me, "if people would use this weed there would be very little cancer in the world." He told me the name of the plant. It was one of the herbs my patient named as an ingredient of the Indian medicine man's tea!

A few months later I received word that my mother's only sister had been operated on in Brockville, Ontario. The doctors had found she had cancer of the stomach with a liver involvement, and gave her at the most six months to live. I hastened to her and talked to her doctor. He was Dr. R.O. Fisher of Toronto, whom I knew well because I had nursed patients for him many times. I told him about the herb tea and asked his permission to try it under his observation, since there was apparently nothing more medical science could do for my aunt. He consented quickly. I obtained the necessary herbs, with some difficulty, and made the tea.

My aunt lived for 21 years after being given up by the medical profession. There was no recurrence of cancer. Dr. Fisher was so impressed he asked me to use the treatment on some of his other hopeless cancer cases. Other doctors heard about me from Dr. Fisher and asked me to treat patients for them after everything medical science had to offer had failed. They too were impressed with the results. Several of these doctors asked me if I would be willing to use the treatment on an old man whose face was eaten away, and who was bleeding so badly the doctors said he could not live more than 10 days.

"We will not expect a miracle," they told me. "But if your treatment can help this man in this stage of cancer, we will know that you have discovered something the whole world needs desperately — a successful remedy for cancer." My treatment stopped the bleeding in 24 hours. He lived for six months with very little discomfort. 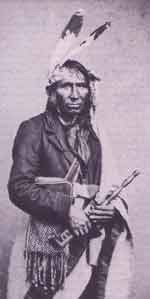 An Ojibway Native probably like the Indian who visited the Englishwoman

"If people would use this weed there would be very little cancer in the world."

"...we will know that you have discovered something the whole world needs desperately — a successful remedy for cancer."